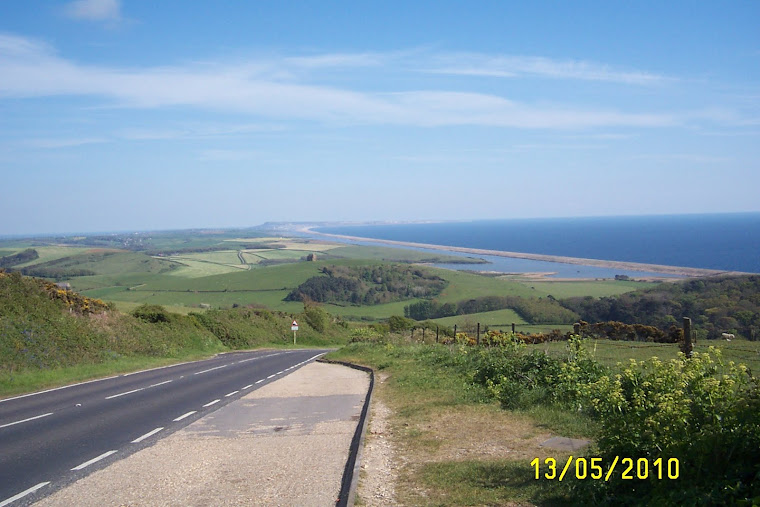 With the pandemic still having a firm hold on the world, travelling around has been very difficult. Even now, although we can travel locally to different places, most buildings such as churches etc. are locked and cannot be visited. Therefore, pictures and updates will be scarce for awhile
Posted by LittleInsect at 16:59 No comments:

Staplecross - another of those Wealden villages lost in time.

Well, today being May Day, it was time for our annual pilgrimage to Hastings for the annual motorcycle run. We have got into the habit of dining at one of the many old pubs in either Kent or Sussex,  and this year it was the turn of The Cross Inn at Staplecross, between Bodiam and Northiam. It's a lovely old pub, and the surrounding cottages are mostly old, white weatherboarded traditional buildings.
Directly opposite the pub, stands the rather unusual war memorial, with a design that I have only ever seen in nearby Ewhurst Green. 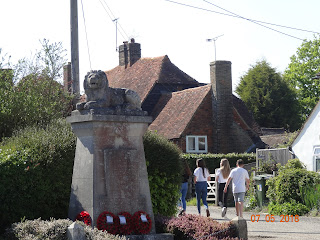 No matter how bad our Summer has been, there's always a chance of an Indian Summer in middle to late September, and this year is not disappointing. Despite a couple of chilly weeks, today was absolutely gorgeous, warm, with brilliant sunshine.
So I decided to do something I've not done for ages - an almost complete journey round the coastline of Kent.
I only had a few hours, so I didn't stop to take many pictures. I've photographed most of the places before anyway, and things are very slow to change outside of the big cities in the UK.
However, I have added a couple of new photos to the Kent page, because...............well, just because..........
Posted by LittleInsect at 11:43 No comments:

BODIAM
If you Google for images of Bodiam Castle, you will see loads of pictures taken from the edge of the moat, of the brooding castle, with its massive towers and strong drawbridge. I thought you might like to see a different view of it 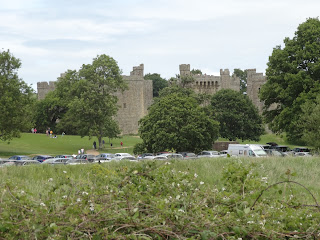 Bodiam Castle  is a 14th-century moated castle near Robertsbridge in East Sussex, England. It was built in 1385 by Sir Edward Dalyngrigge, a former knight of Edward III, with the permission of Richard II, ostensibly to defend the area against French invasion during the Hundred Years' War. Of quadrangular plan, Bodiam Castle has no keep, having its various chambers built around the outer defensive walls and inner courts. Its corners and entrance are marked by towers, and topped by crenellations. It was the home of the Dalyngrigge family.
Possession of Bodiam Castle passed through several generations of Dalyngrigges, until their line became extinct, when the castle passed by marriage to the Lewknor family. During the Wars of the Roses, Sir Thomas Lewknor supported the House of Lancaster, and when Richard III of the House of York became king in 1483, a force was despatched to besiege Bodiam Castle. It is unrecorded whether the siege went ahead, but it is thought that Bodiam was surrendered without much resistance. The castle was confiscated, but returned to the Lewknors when Henry VII of the House of Lancaster became king in 1485. Descendants of the Lewknors owned the castle until at least the 16th century.
By the start of the English Civil War in 1641, Bodiam Castle was in the possession of Lord Thanet. He supported the Royalist cause, and sold the castle to help pay fines levied against him by Parliament. The castle was subsequently dismantled, and was left as a picturesque ruin until its purchase by John Fuller in 1829. Under his auspices, the castle was partially restored before being sold to George Cubitt, 1st Baron Ashcombe, and later to Lord Curzon, both of whom undertook further restoration work. The castle is protected as a Grade I listed building and Scheduled Monument. It has been owned by The National Trust since 1925, donated by Lord Curzon on his death, and is open to the public.
Many of you will remember it as the scene of Adam Ant's 'Prince Charming' video
Posted by LittleInsect at 12:01 1 comment:

Not so much a review of Staplecross, as a recommendation. Staplecross itself, is not somewhere I've really explored, as it holds no real significance historically, but does boast one or two nice buildings that might be worth a visit at some point.
However, on the road from Cripps Corner heading towards the village, is a very nice little garden centre. The centre has a smashing cafe in an old railway wagon, which is handy for a spot of very nice lunch, and is now home to a couple of ex-Hastings trams that are being patiently restored. You can go and watch the volunteers working, and there's usually a very nice elderly gentleman available to show you around their base, their models, and the row of tiny period shops that are being constructed. He's a mine of information, which he's only too pleased to share with anyone prepared to listen! It's free, but if you visit them, please drop a donation in their bucket. They're doing a stirling job with very few resources 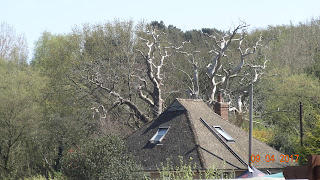 umm...no, it's not growing out the roof! 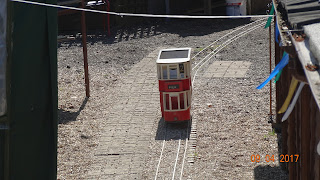 tiny replica tram that little ones can sit in and be pushed along a short stretch of track. And they can ding the bell! 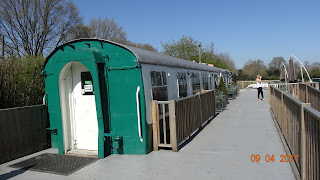 
Posted by LittleInsect at 10:05 No comments:

OK, so here we go with the 2017 touring season. I spent yesterday poking around the small villages that inhabit the Kent/Sussex border between Tunbridge Wells and Lewes, and I must say, I could do with visiting this area more, as my time was limited, and I had to ride through some of them without time to stop.
However, here's a couple I particularly liked.

First, Stonegate, which lies not far from Ticehurst, on the lane that leads out to Burwash Common.
I must say, although the little B road from Ticehurst to Stonegate is in a poor state of repair, it is a pretty lane, and some of the views are stunning.
The most redeeming feature of Stonegate is the parish church, with its unusual lych-gate. Although only built in 1904, it has on olde worlde feel about the design.
The village dates from Roman times, when it stood at the crossroads of two Roman roads. 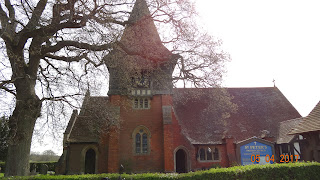 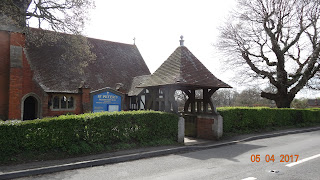 From there, it's just a short ride to Burwash Common, and then onto Burwash itself. Burwash is best known at the location of Batemans, one-time home to Rudyard Kipling, and a popular visitor attraction.
With its main street lined with pollarded trees, and a fine church at its centre, it's a very pretty village despite having a busy main road traversing it. 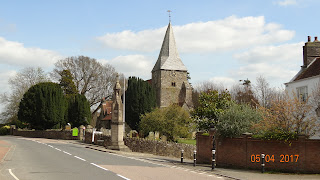 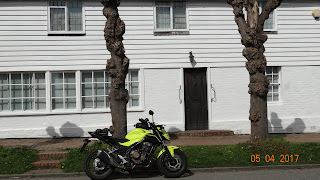 Posted by LittleInsect at 11:14 No comments:

Tiny hamlet, which lies on the border of Devon and Somerset. In fact, the border is on the bridge which forms the divide between the two counties. There's a pub next to the bridge, the Anchor, which has a pleasant garden running alongside the River Exe. 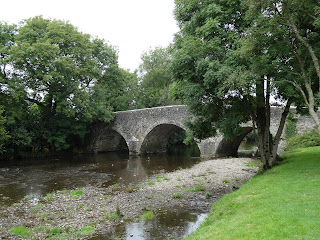 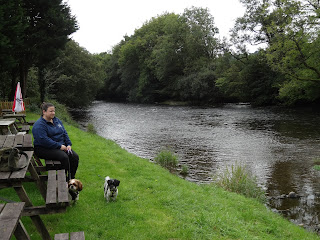 About 7 miles from the lovely own of Dulverton, in the heart of Exmoor, Exford stands where the road crosses the old bridge over the River Exe. Well, I say old bridge, but actually it was built in around 1930 on the site of an earlier medieval bridge.
Next to the bridge in the heart of the village, is the 16th. century White Horse Hotel. It looks imposing and expensive, but is in fact, a welcoming hotel which serves a delicious Devon cream tea, and which welcomes dogs. 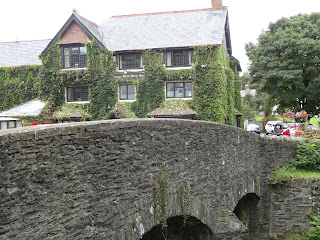 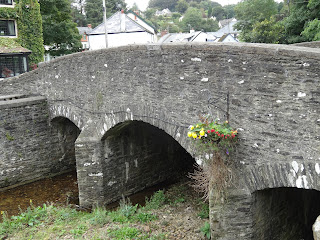 Curiously, on the other side of the bridge stands this building - 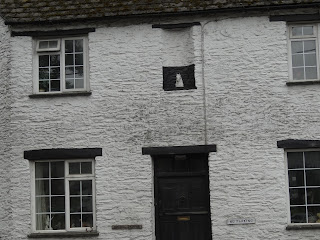 Given the white horse's head statue high up on the wall, I did wonder if it was a precursor to the White Horse hotel opposite, but that is apparently 16th. century, so how old would that make this building? I've not been able to find out anything about it, but it piques my curiosity

Quite my favourite wilderness in the South West, Exmoor straddles North Devon and West Somerset. Partly agricultural land, and partly a treeless wasteland of sedge, it's home to the cute semi-feral Exmoor ponies, which roam freely on the common land.
They have remained largely pure-blooded since the last ice-age, and are unique to Exmoor.
Classified as endangered, they are rounded up once a year to be checked over and for the new foals to be tagged. 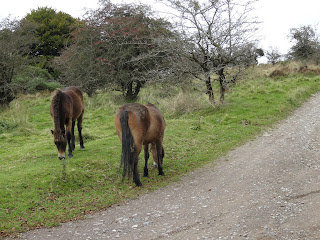 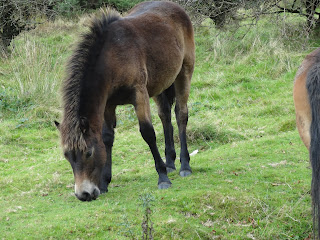 Deep in the heart of Exmoor, Simonsbath stands at a junction of roads. There's plenty of car parking, and a large picnic area and field to play in. There's a pretty river, and an old school, which is being restored. There is also a lovely short woodland walk featuring all sorts of animals and birds carved from rough fallen timber by Mike Leach, who is a National Park Ranger. 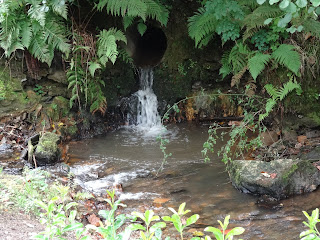 Email ThisBlogThis!Share to TwitterShare to FacebookShare to Pinterest
Labels: Somerset

Lying about 4 miles east of Ilfracombe on the north coast of Devon, Combe Martin is a pretty seaside town, set around a little cove. It features a sandt beach, surrounded by rock pools, and narrow winding streets. 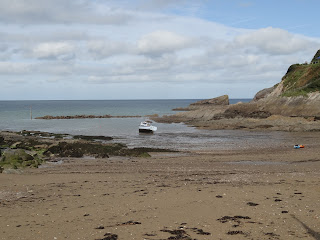 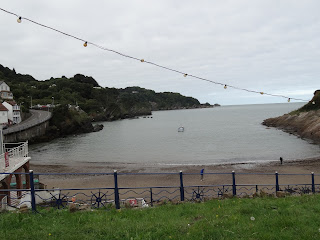 Ilfracombe is a lovely town on the north coast of Devon, with a small harbour surrounded by steep cliffs. The big attraction for us, is that there is a rocky cove with a shale beach - totally unsuitable for normal family beach activities, it is available for people with dogs to go and have fun - and boy, do they! We took our two little Shih Tzu puppies down there and they wore themselves out, playing chase around the rocks, and behaving like mountain goats. 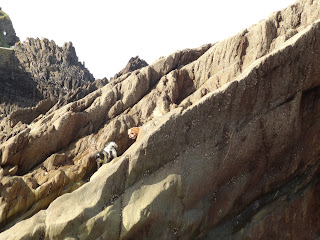 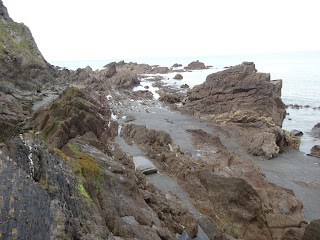 It's also a good spot to watch cormorants fishing 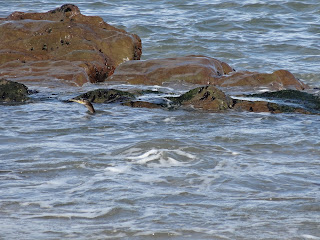 Posted by LittleInsect at 14:59 No comments:

Email ThisBlogThis!Share to TwitterShare to FacebookShare to Pinterest
Labels: Devon

On my way to my regular haunt in Mid Wales, I travel through Kent, Surrey, Middlesex, Buckinghamshire, Oxfordshire, Warwickshire, Worcestershire, Herefordshire...........and the beautiful county of Shropshire.
One of my favourite little towns is Cleobury Mortimer, with its church with an ever so slightly crooked spire. Nothing like Chesterfield, but definitely off kilter 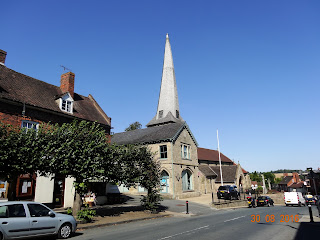 Posted by LittleInsect at 15:57 No comments:

Email ThisBlogThis!Share to TwitterShare to FacebookShare to Pinterest
Labels: Shropshire

Yet another trip to my favourite part of the British Isles. Found some new roads, and revisited some of my favourite places. I'm very familiar with the villages of Clatter and Knockin (no, not my bike!) but I found one called New Invention this time! Wales page duly updated, although I didn't take too many pictures this trip
Posted by LittleInsect at 15:52 No comments:

Links to other sites about the British Isles

The one thing I love, is riding my motorcycles around the beautiful British Isles. This is a collection of some of the places I've been, and seen.

These small islands are an entire library of different geographies, history back to the dawn of time, and some of the most beautiful places in the world.

The posts are split into counties, and will be updated by me, whenever I come back from my travels.

Some of my favourites are split out onto their own pages. Please take the time to explore them, as I myself explore the real thing. Oh, and don't imagine all of the posts will be about well-known places. I like the unusual and the obscure.

I hope you enjoy them!
Oh, and importantly, "This site uses cookies from Google to deliver its services and analyze traffic. Your IP address and user-agent are shared with Google along with performance and security metrics to ensure quality of service, generate usage statistics, and to detect and address abuse."

LittleInsect
I'm a motorcyclist, I'm not young, I'm outspoken and a bit of a bitch!